“Jerusalem, Jerusalem.” Oh, Jerusalem is so many things. Jerusalem is a complicated place. When I was there in the summer of 1993, I would sit on the steps in the Old City looking out over the Temple Mount, and from that spot, you could see so many things—the Western Wall where Jews gather to pray and slip little pieces of paper bearing their prayers in the cracks between the stones, the Dome of the Rock and the Al-Aqsa Mosque which sit atop the Temple Mount—sites holy to Muslims where th 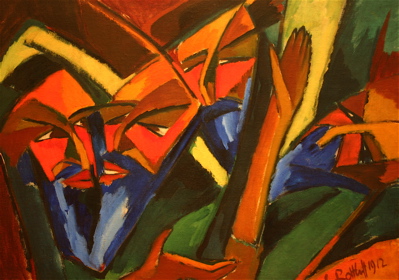 ey would go to say their prayers, you’d see Christians walking the Via Dolorosa, the way of grief and suffering that Jesus walked as he carried his cross. At that spot in the Old City, you could close your eyes and hear Jewish folk music, and the minaret calling the Muslims to prayer, and the bells tolling at the Church of the Holy Selpuchre, calling Christians to worship at the church that marks the place of Jesus’ crucifixion and resurrection, and you heard all of these at the same time. Jerusalem is a complicated place, and that is just the cultural and religious complexity. There is also the political complexity over the status of Jerusalem and how it figures into a two-state solution for Israelis and Palestinians. And Jerusalem was no less complicated in the time of Jesus.

It was the center of everything. The Temple was there. It was where Jews went for the great festivals. It was where the teachers taught and sacrifices were made and sins were atoned for. It was where the religious and political elite commingled. This was the place of the insiders. If you were to ask them how Jerusalem was doing, they’d probably say, “Just fine.” It was working well for them. They were the Washington Insiders of their day.

Except all was not fine. The lifegiving religion of the Jews was in terrible need of reform. They had lost the forest for the trees. As Jesus went about his ministry, he kept bumping into this religious rigidity. Just earlier in this chapter, he had healed a woman bent over, crippled for 18 years, and he was in plenty of hot water with the leader of the synagogue. Do you know why? What was his offense? He healed her on the sabbath. Or, a few verses later, someone asked him if only a few would be saved. What would motivate such a question? Jesus’ answer was that people should strive to enter through the narrow door, for many will try to enter and will not be able. And he goes on to say that those that think they know him, don’t, and that those folks will be surprised when they see Abraham and Isaac and Jacob and all the prophets in the kingdom of God, and not themselves. Even more, people will stream in from the east and west, from the north and south, and some who are last will be first and some are first who will be last. So, maybe the narrow door is about living with a generous, open spirit, holding a space for the last in society, when the pious folk have room only for a few.

All was not fine. The prophets had known for some time that good worship was meaningless if the poor were getting trampled, and the poor were indeed getting trampled. The prophets knew that religion was failing if the people only experienced greater and greater burden. And from the looks of the crowds that were following Jesus, begging to be healed, the burden was heavy indeed. The prophets kept trying to say to Jerusalem, “It’s not okay. Something is seriously out-of-whack.” But all Jerusalem could say in return was, “It’s fine. It’s working for us.” To heed the prophets would be to admit the need for change, from the top down and from the inside out. It was easier to lay burdens on people, spiritually and financially, than to risk changing. And so the prophets were silenced, people suffered, and the religious and political elite kept right on with business as usual.

In today’s scene, some Pharisees come to warn Jesus, “Get out of here. Herod wants to kill you.” Herod had already killed his cousin John, so this threat is a serious one. Jesus isn’t scared. “Go tell that fox for me, ‘Listen, I’m casting out demons and performing cures today and tomorrow, and I’ll finish on the third day. But today, tomorrow, and the next day I must be on my way because it’s impossible for a prophet to be killed outside of Jerusalem.’” Herod ruled in Galilee, and if he wanted Jesus dead, well that was just tough. Jesus had bigger fish to fry—casting out demons that were destroying people, healing people who needed healing, and heading on down to Jerusalem. It was time to take his message of love and compassion and mercy and grace into the heart of it all. Jesus was no fool; he knew prophets had never fared well there, but he also knew that Jerusalem was the heart, and if the heart was sick, then the whole body couldn’t heal.

Jesus wants to gather folks together, just like a hen gathers her brood under her wings. But the people were not willing, and Jesus isn’t about to force them. He says, “See, your house is left to you. You can have your Temple. You can have the outer trappings of your faith, but I won’t be satisfied until I change the heart of it, but I also cannot take you somewhere you do not wish to go.”

God is infuriating that way. God refuses to coerce us; God refuses to force us into the way that will bring us life. All the prophet can do is proclaim what is not right, and point us toward the way of justice and holiness and life, but it is left to us to change it. All Jesus can do is live a life of compassion and love and mercy, and by the sheer opposition he encountered from good religious folk, reveal how truly lost the religion of his day had become.

So, I think this story is working on two levels today. First, where is our communal Jerusalem? Maybe it really is Washington D.C., or maybe it is within our own town, or maybe it is within our own religious tradition. Where are those places in our civic life or in our religious culture that are saying, “It’s just fine,” when all indicators are saying, “It’s not fine at all.” Where are those places where it is working for some, but not for others? Who are the prophets that are crying out? Are we hearing their voices, or are we silencing them with our indifference? We may not actively stone them; I think our way is much more subtle and passive—in fact, I’m not even sure there is space in our world to hear the prophet’s cry to begin with; I think we are far too distracted to get even that far. Are we content to have our dysfunctional structures stay the same, to be “left to our house” so to speak, because it’s just much easier to stay within the structures we have than looking deep within the heart of our society or our religion and letting Jesus set right what has gone so far astray. Because if we let Jesus have his way, some who are last are going to move forward and some who have been on top are going to have to yield. Are we willing to be disoriented as Jesus, working through us, makes our world new?

So, there’s the communal level. But I think this also works on an individual level. Where is that complicated place inside of us—that place that is all jumbled up inside, filled with competing voices, including the one who continues to proclaim, “It’s fine. This is working for us.” Who are the prophetic voices inside of us that are trying to call attention to what is amiss, that are trying to tell us, “This is not what I made you for—I don’t intend for you to be this harried, this anxious, this fearful, this stressed, this burdened, this angry, this…fill in the blank. I made you for joy and love and abundance and freedom.” The truth is, we all have a Jerusalem living inside of us, a place of immense complexity with competing interests, all of which have a claim to space, all of which have the potential for incredible holiness and all of which can lose the forest for the trees. And if we can get still enough and quiet enough, we all have a prophet who is willing to call us back to the path of life, who longs to call us back to the way of God, who longs to gather us under his wing and shield us so that we can get our bearings again.

Lent is that time to take stock, to look at the complexity that exists within us and beyond us. To see where it has gone off the rails, in our world, in ourselves. Lent is a time to heed the prophet’s cry, to see what is not fine, to acknowledge what is not working for us, as individuals and as a society.

Jesus refuses to force us to go where we are unwilling to go—it is always an invitation—but that won’t keep him from clucking and calling us to take shelter under his wings. If the prophet’s cry is too faint for you to hear, just take a step toward the clucking, and rest a while there. We’re going to need our strength if we are ever to stand up to the foxes, both the ones out in the world and the ones in our own hearts. Amen.