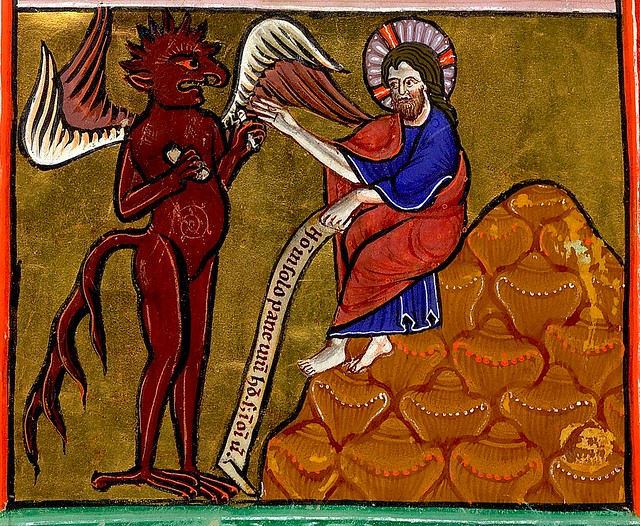 You gotta love God. God has just declared to Jesus, “You are my Son, the Beloved, with you I am well pleased” and the very first perk of being so well-beloved is a 40 day tour of the wilderness complete with fasting. It is not the devil who leads Jesus there, but the Spirit—the same Spirit who filled him at baptism is the one responsible for this wilderness sojourn. And for forty days, he was tempted and tested by the devil. We don’t know the exact nature of that testing; the only thing we know is that by the end, he was really, really hungry. And here is where the story picks up today. Three more tests.

“Jesus, if you are the Son of God, command this stone to become a loaf of bread.” Now, if you haven’t eaten for 40 days, how is this sounding to you? Sounds pretty appealing to me. This is the temptation of the expedient, the quick-fix. The devil is hitting Jesus at his most vulnerable place—the place of his hunger. For what do you hunger, and what are you tempted to do to meet that hunger? What are you willing to compromise of the long-term to fix the short-term? How does our short-sightedness compromise our vision? Jesus feeds on the sacred text in his answer—“It is written, ‘One does not live by bread alone.’” Sometimes, we need to look beyond that most pressing need we feel to see how God might be feeding us in a deeper way, a broader way. Yes, we need the bread, but we also need many other things to thrive. We need love, and to know that someone cares. We need to know what it means to be beloved and to feel in our bones that God is well-pleased with us.

The devil is persistent. He took Jesus up and showed him in an instant all the kingdoms of the world. And the devil said to him, “To you I will give their glory, and all this authority…If you, then, will worship me; it will all be yours.” This is the temptation of the spectacular; this is the lure of power and control which Cynthia Bourgeault names as one of the pillars that props up the False Self. “Jesus, think of what you could do if all the kingdoms of the world were under your control. You could solve the Palestinian-Israeli conflict. You could end the civil war in Syria. You could take care of extremist factions in Iraq or Afghanistan. You could solve the pollution in India. You could end gridlock in Washington D.C. You could do so much,” cries the False Self. Do you ever hear the False Self whispering such things in your ear? But if we have to sell our soul to the devil, literally, to achieve this, the price is just too high.

Now this is hard for Episcopalians; we don’t often talk so directly about the devil, but if we can think about the devil as shorthand for the diabolical, then we can begin to make sense of this. The diabolical literally means, “to throw apart.” If we are not connected to the True Self, if the False Self is running the show, our work may be good for a time, but eventually, the ego’s need for power and control will turn in a diabolical direction. Eventually, our good motives will give way to dualisms. If I have a notion of original sin, it is this, that when I seek to do good, if I am not securely anchored in God, it just seems to turn in directions that aren’t lifegiving. I don’t know why this is; I only know that this is what always seems to happen.

Boy, the devil then doubles down. He took him to Jerusalem, and placed him on the pinnacle of the temple (that’s the highest spot in Jerusalem), and said to him, “If you are the Son of God, throw yourself down from here, for it is written, ‘He will command his angels concerning you, to protect you,’ and ‘On their hands they will bear you up, so that you will not dash your foot against a stone.’” Oh, this temptation is a full-on assault, and subtle too. Not only is the devil now appealing to the sacred text, just like Jesus does (talk about perils of proof-texting—you really can twist the Bible to incredibly destructive ends), but the devil is doing it in such a way so as to challenge the very relationship that Jesus has with God.

The first two temptations are asking Jesus to do some action, but this third temptation is pressing Jesus on his faith in God to do something on Jesus’ behalf—namely keep him safe and secure. “Jesus, do you really believe God will be there for you? Then prove it. If you have enough faith, then no harm will come to you. If you really are a beloved Son, like you say you are, then nothing bad will happen to you.” Oh, this is the temptation of security on steroids. This hits another pillar of the False Self—safety, security, and survival. The fundamental question, “Will I be okay?” combined with our insecurity around our identity. Does Jesus really believe he is a beloved Son? Do we? And if we do believe it, what do we think that means? Do we believe that if God really loves us, and we really love God that no harm will ever come to us?

Jesus won’t even engage the devil on this one. He simply answered, “It is said, ‘Do not put the Lord your God to the test.’” In other words, “Enough, devil. You haven’t a clue as to what being a beloved of God means. This is not some kind of cosmic game of chicken that we play daring God to pull us out of harm’s way at the last second. There are no promises here of a pain-free life. The promise is not that won’t suffer, or even die; the promise is that death will not have the final word, and the word we have for that, dear devil, is resurrection.”

And when the devil had finished every test, he departed from him until an opportune time.

Hmmmm. Until an opportune time. The whole dynamic of temptation is not a one-and-done thing. Temptation is an ongoing dynamic in our lives. Tests come. The diabolical is still out there trying to throw us apart, trying to throw us out of Presence. Call it the devil, call it evil, call it sin, call it brokenness, call it a dynamic generated by our limited humanity, call it a lack of enlightenment or vision or consciousness. Whatever “it” is, we still have to wrestle with “it.”

But the way of Jesus is the way of resurrection. One child at a time. One sewing training center at a time. One old-age feeding program at a time. One microfinance loan at a time. One cow at a time. One well at a time. It is not quick. It is not expedient. It is not spectacular. It is not always successful. Some girls leave the child development programs and return to their families only to be given away in marriage at age 12. And yet, who knows what seeds were planted in that child’s time with these people who loved her as the beloved daughter of God that she is? Who knows how those seeds might grow and how that girl might draw on that love to sustain her years down the road when life is hard. Once you know you are a beloved of God, you can’t ever not know it again—you might lose touch with it, but the fact remains, this is who you are; this is who you are made to be. The diabolical may try to separate you from this truth, but today reminds us, the devil is no match for Jesus. And for the last two weeks, I have seen the fruits of what happens when you stare destructive forces in the face and say, “God’s love is stronger.”

Temptations and tests will come, but Jesus goes before us. He will show us the way. It won’t be quick; it won’t be glitzy; it won’t be spectacular; it may even look to the world like death, but in this you can rest secure, resurrection will not be denied. In the end, love wins all—one beloved child of God at a time. Amen.